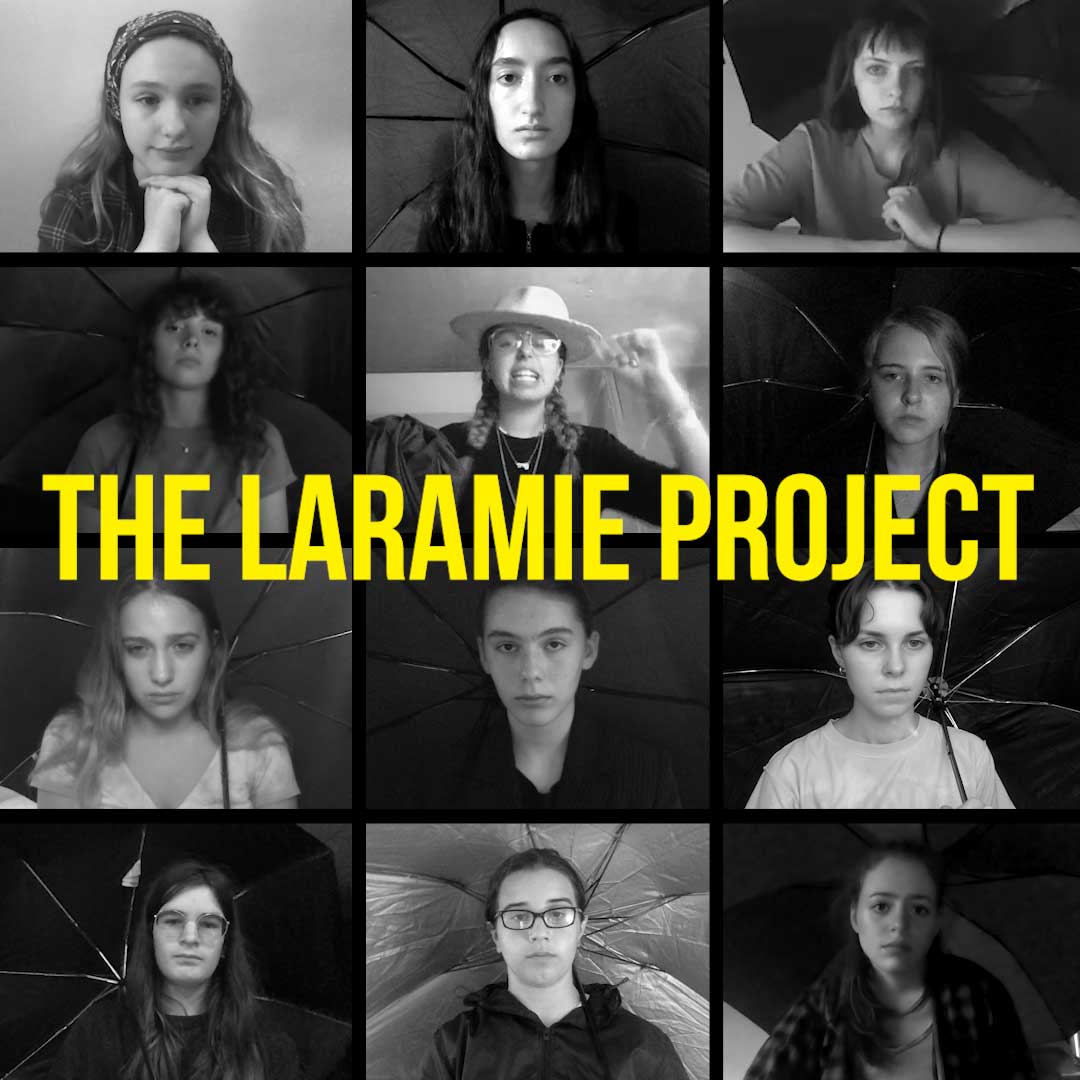 and the Members of the Tectonic Theater Project

When the pandemic hit a year ago, Unity Stage’s Teen Theater was halfway through intense rehearsals for their production of The Laramie Project. The cast, many of whom had been working with co-directors M.J. Geier and Daniel Weiner for half their young lives, decided to keep the play going with virtual rehearsals. Ultimately, they performed the play “live,” from their homes, going straight through with intermissions just like an in-person performance. Post-production was handled by the gifted creative at Ticking Clock Productions. The twelve actors play almost seventy roles. Not suitable for children under 12.*

The Laramie Project is a play about the people of the town of Laramie, Wyoming, known as the “gem city of the plains,” and their reaction to the 1998 murder of twenty-one year old gay university student, Matthew Shepard. All dialogue is taken verbatim from in-person interviews with the residents of Laramie conducted by the Tectonic Theater Project.

“I keep wondering the same thing. What would he have become? How could he have changed his piece of the world to make it better?”~ Dennis Shepard, Matthew’s father, spoken at the sentencing of Matthew’s murderers.

Tickets for Saturday March 13’s Virtual Screening at 6:30pm are available at Eventbrite.

10% of proceeds will be donated to Peter Cicchino Youth Project. For over 20 years, PCYP has provided direct legal services and advocacy to New York City’s homeless youth, with a focus on the needs of LGBTQ+ youth.

Runtime: 2 hours with two (5-minute) intermissions, including LIVE interaction with members of the cast. Audience members are welcome to comment via the Chat.

*The dialogue describes in graphic detail by medical professionals on the scene the condition Matthew Shepard was found in, plus swearing by several characters. (All dialogue is in the exact words spoken by the people of Laramie in interviews conducted by Tectonic Theater members.) Please use discretion in allowing children under 12 to view the play.

Written by Moises Kaufman
And the Members of Tectonic Theater Project

The Laramie Project was developed in part with the support of
The Sundance Theatre Laboratory.

The Laramie Project was written through a unique collaboration by Tectonic Theater Project. During the year-and-a-half development of the play, members of the company and I traveled to Laramie six times to conduct interviews with the people of the town. We transcribed and edited the interviews, then conducted several workshops in which the members of the company presented material and acted as dramaturgs in the creation of the play.

As the volume of material grew with each additional trip to Laramie, a small writers’ group from within the company began to work more closely to further organize, and edit the material, conduct additional research in Laramie, and collaborated in the writing of the play. This group was led by Leigh Fondakowski as Head Writer, with Stephen Belber and Greg Pierotti as Associate Writers.

As we got closer to the play’s first production in Denver, the actors, including Stephen Belber and Greg Pierotti turned their focus to performance, while Leigh Fondakowski continued to work with me on drafts of the play, as did Stephen Wangh, who by then had joined us  as an Associate Writer and “bench coach.”  — Moises Kaufman, Author

To make The Laramie Project, one of the most performed pieces of contemporary theater, Moises Kaufman and his company interviewed hundreds of people about the murder of gay college student Matthew Shepard. The interviews became monologues, which makes the text particularly well-suited to filming via Zoom.

Our twelve actors, most of whom grew up performing with Unity Stage and trust each other onstage, were enthusiastic about continuing rehearsals virtually. One actor said of their production “it could be an important time capsule.” The directors continued using improv as a tool to unify the troupe, and relied heavily on Tectonic Theatre Project’s Moment work to reformat the play for a virtual space. Moises Kaufman explains Moment work as “a way of devising theater using all the elements of the stage (lights, sets, props, sound, costumes) in the creation of a narrative” – not merely as a backdrop for the words or action, but, as an integral part of performance.

Workshops on mime, and creating your own sound and lighting from available sources added to the prep work, as well as hour-long Zoom “framing” sessions with each actor to make sure they would look their best in their created “sets” (mostly rooms in their homes.)

But, is this theater? The actors had initially expressed concern that performing virtually meant they would lose the precious backstage excitement and bonding of “putting on a show.”

In early July the actors finally performed the play live in its entirety, only taking short breaks between the acts. The excitement was there. Support for their fellow actors was strong. Playing nearly 70 characters they moved from light to shadow to light in the grid, always visible, pulling on a sweater, taking off a knit cap, subtly transforming while we observers were given the gift of seeing the actors “backstage” and “onstage.” Against tremendous odds these twelve young actors and their directors created live theater in a new format!

Footage is currently being edited and we look forward to announcing a date for an in-person screening or online streaming of this production for friends and family. Watch this space!

All shows are held at: